Tuesday again already, it’s been a very quick week. This week should slow things down a bit as I am on holiday – so plenty of time to read, write and that cursed word EDIT. Although, I have to say that I’ve gained a fresh appreciation for it as I am currently struggling to get through a book that could have done with a lot more editing before being released into the wild.

On a happier reading note. I finished ‘The Wolf’s Call’ by Anthony Ryan about half five this morning after spending the entire night reading – which is what I will be talking about today. I am continuing to work my way through ‘Spark City’ by Robert. J. Power and I have just started ‘North Child’ by Edith Pattou. 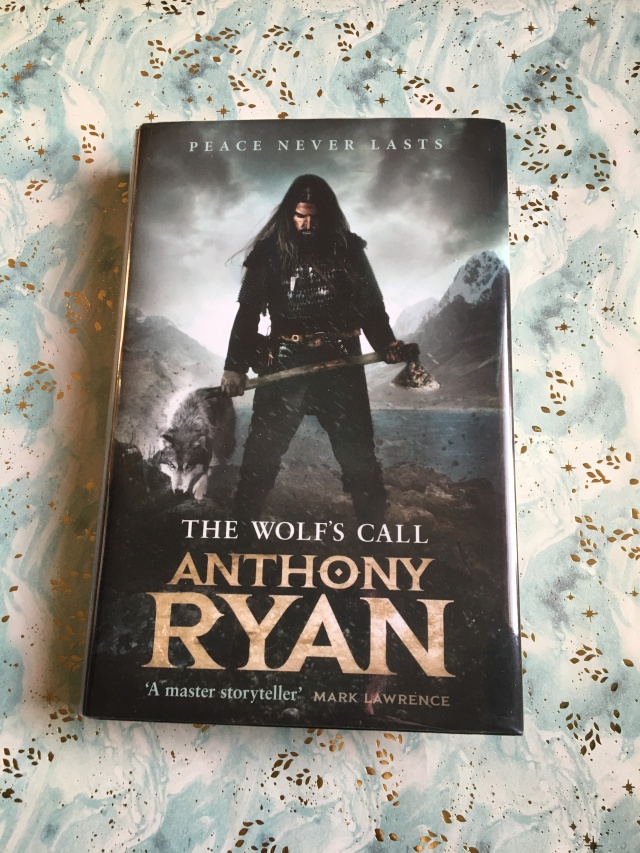 When ‘The Wolf’s Call’ (available here) was first announced, I was ecstatic. I had loved the original Raven’s Shadow trilogy, and they remain firmly on the list of my favourite books and I have reread them, and the various novellas written in the same world multiple times. So, as soon as I heard about the duology I rushed to pre-order it, treating myself to one of the signed first editions from Goldsboro books – and then I never got around to reading it, even though I planned to start it countless times (hence the fact that I am using this book for the ‘book I meant to read last year’ square on the #armedwithabingo). I think part the delay was because I loved that world so much, while I had struggled a little to get into the Draconis Memoria trilogy, although I intend to revisit that series this year, and I was worried that might bleed through into this book.

I needn’t have worried.

Last night, I sat down picked it up, going back to the start even though I had only started it this year…and I couldn’t stop.

It was like I had never been away from the world, even though ‘The Wolf’s Call’ takes us far beyond familiar lands, to parts of the world that had been mentioned in the previous trilogy but were exciting and new while remaining grounded in the continuing world and narrative.

That has always been one of the stands out things for me about Anthony Ryan’s work – the breadth and depth of his worldbuilding. I loved detailed worlds that I can keep coming back to and finding new details, and that is what the previous trilogy – and this book delivers, without becoming too lost in the details. For me at least it is perfectly balanced between this rich (and fantastically dark) world, the story and the characters.

In particular, the use of faith through the series is fantastic. From the more regulated faith of the Orders to the Dark and everything in between there is nothing unquestioning in its portrayal – in fact, every step of the story is challenging those different interpretations of faith, and Gods and destiny. It plays its role in the actions of the characters, and the wider world – but it isn’t the answer to it – some accept it, some refute it entirely, while others work with it as they must, and that is an approach I enjoy.

As is the fact that the entire world is shades of grey.

Black and white, might exist from the viewpoint of some characters, but as a reader, I find that even the antagonists be they human or something more to all have something ‘human’ in them. Something that I can relate to, and you can see the reason behind their actions – even the worst ones, to the point where I can’t help but appreciate all the characters even if I don’t like them. Just as you can see the impacts of what has happened -the cost of what they’d survived and what they’ve done – none of it is swept under the carpet, and that makes it that much more realistic.

Vaelin is also a fascinating character, and probably my favourite character in both the original trilogy and the first part of the duology – and I continue to love him as a character, even as I shout at him for some of his choices. He’s flawed. He’s scarred. He doesn’t accept anything at face value, and he makes mistakes, fights destiny and accepts it in equal measure. It makes him a fascinating protagonist, and someone you root for – because he is human.

However, the entire cast of characters is rich and varied, and there are no paragons of virtue. It was fantastic to revisit familiar faces such as Nortah, Sherin and Am Lin, while also meeting new faces such as the Jade Princess and Sho Tsai (who I was unsure of at the start but loved by the end). Different backgrounds and experiences brought together by circumstance and making the best of it. It is a very human story, in a grim, fantastic world, and I would happily read many more stories in this world.

‘The Wolf’s Call’ for me was both a beautiful reintroduction to one of my favourite series, worlds and characters, but also a masterclass in storytelling. From the worldbuilding to the plot, the characters (and don’t get me started the fight scenes, as I could wax lyrical about them forever)  – it had me hooked. In fact, the first thing I tweeted this morning was about the feeling you get when you finish one of THOSE books. The ones that will stick with you. The ones that leave you full, but still wanting more (and I really do want more), happy and yet strangely bereft because it’s finished.

‘The Wolf’s Call’ gave me that feeling (and renewed my desire to be able to craft stories like that).

Now, the only question is, how do I wait until July for book two?

(You can check out the author HERE)