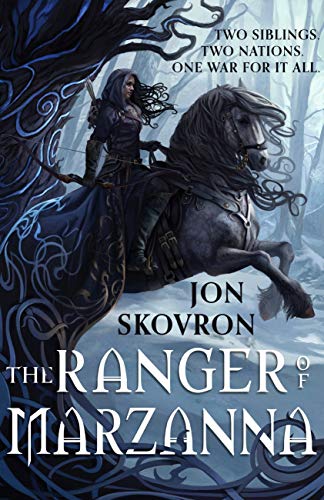 The Ranger of Marzanna was a book that I thoroughgoingly enjoyed reading but did leave me with somewhat mixed feelings. I enjoyed the writing, and until the end, the pacing was well balanced, it was a story that carried you along, and the worldbuilding was fantastic, creating a very atmospheric read. I enjoyed the Russian-inspired aspects of the story, and the description, especially when it came to the environment was spot on, as you could feel the chill.

One of my favourite parts of the book, and what stood out for me the most was the Rangers – their religion, and how their relationship with their Goddess worked. The idea of boons and divine intervention coming at a cost, that brought the Ranger closer to her, and the wild was fascinating, and the effect those changes had on the Rangers. It was something a little different, and I hope that this will be explored further in the next two books, especially as we have seen glimpses of what it is doing to Sonya’s character. In contrast, the magic that is used by her brother was less distinctive – although some of its applications were interesting – and I would have liked to have learned more about the rules and restrictions, although that might come later on.

In terms of the characters, I adored Sonya from the start – that is not to say that she was perfectly written, or that there weren’t aspects of her character that felt a little too emotional and extreme. But I certainly connected more with her than any of the other characters. She was flawed and conflicted, impulsive, but learning to how to strategize and lead, and be what the people needed her to be. Her brother, on the other hand, was not a character I could connect with. There was a point when he first questioned what he was doing that I thought that maybe he would be redeemable, but by the end of the book, any sympathy I might have had for him had long since disappeared. I felt that the characters that were against the Empire were more developed and interesting than those that served the Empire, although that may be more due to the context and may change in the next book.

I think the biggest issue that I had with the book was the ending. Throughout the story, we had been building to this conflict, but when it came, it felt incredibly rushed. We got to see some of the build-up on both sides – and again, I thought that the strongest part of the narrative was on the side of the opposing force rather than the Empire, but the battle itself, felt as though it was over in the blink of an eye. That is not to say that there weren’t some stand out moments. Such as the adverse effects that Sebastian’s Elemental Magic could have on his side, and the way Sonya’s ‘beast’ qualities rose to the surface- but for the most part, it was a disappointing conclusion to the tension that had been building.

However, despite the flaws, I did enjoy this book which has bumped up my rating. I can’t wait for the next book in the series, especially after the epilogue which to a certain extent redeemed the ending. And I am hoping that the questions I have will be answered and that the characters such as Sebastian that need more development will have that opportunity to grow.