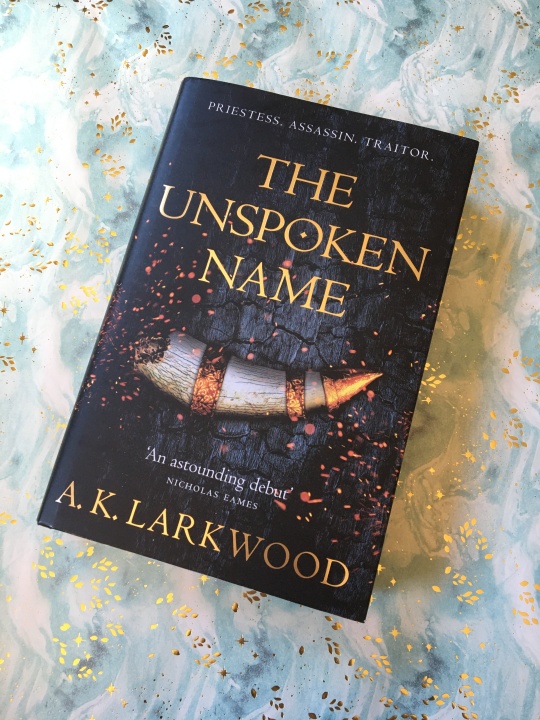 The Unspoken Name was a book that I fell in love with at first sight. You’re not supposed to judge a book by its cover, but sometimes you just fall in love because of the cover, and that was the case here. And for the most part, I was not disappointed by what the story itself. There were a few places where the pacing was off, particularly towards the start of the book which I found dragged a little, and it took a little while for me to get into, whereas later there were moments where there was too much going on and not enough time to breathe. There was also a slight tendency towards telling, rather than showing. That said, these issues pale in comparison to the whole. There was much more to enjoy than find fault with.

World-building was one area that I felt The Unspoken Name succeeded, from the details of Csorwe’s life as a Priestess, and the prospect of her death in service of the titular God, to the world that unfolded when she is drawn away from that path. What was fantastic, is that as we are discovering the world and its possibilities, so is Csorwe. As she travels and explores, discovering the world she had never been able to or inclined to learn about when every path had led to her destined death, and finding new goals and destinations, so are we, and that invested me in both her story and the world. It helps, of course, that this is a wonderful, whimsical world, that for the most part has a good combination of breadth and depth.

The magic and multiverse were both complex, and somewhat convoluted at times, which left me with quite a few questions – especially about the travelling between worlds and I hope that this will be explored more in future books. However, what we did experience was fascinating, and left me wanting more at all turns, and there were lots of twists and turns, both in the world and with the characters.

The book is very character-driven. Even the world-building is more a vehicle for the stories of the characters, and is certainly second to those arcs, although the world played a vital part in shaping those same characters. I enjoyed the characterisation and development of the cast, and the focus on growth and self-discovery versus rigidity, in those opposing the protagonists. Csorwe was a fantastic main character and following her from the beginning – incurious about a world that she was never going to see, to seeing her bloom as she learned new things and skills, and discovered the wider world, you couldn’t help but relate to her. Her journey felt vivid and relatable, and her mistakes and discoveries held weight, as she learned and grew from both, and connected her with the characters around her.

This was a fantastic read that I thoroughly enjoyed and was actually nothing like I expected. It was whimsical and something different, beautifully written, and all in all, even with the issues I mentioned at the start, I would recommend this book. I will certainly be eagerly waiting for the next book and keeping an eye out for anything else that Larkwood releases.

One thought on “Book Review: The Unspoken Name (The Serpent Gates #1) – A. K. Larkwood”