Posting this a little later than planned, as I have been out of sorts the last few days with lockdown getting to me. As it turns out, this means I get to post it on day 30 of the challenge – fond farewells (for now) – because not only are there many farewells in this book, but this entire trilogy leaves me a book hangover every time and fills my heart with far too many feelings. So, it’s a fond farewell to the Godblind trilogy (until I read it again).

I will have some mini reviews, and a wrap-up post (and what comes next) post up tomorrow.

Rilporin has fallen and Corvus, King of the Mireces, reigns over an occupied land. The raiders and their dark religion have conquered, but victory came at a terrible price – the death of a god – and sparks of resistance glimmer on all sides.

In the south, Mace gathers the survivors of Rilpor’s armies. Among the fierce tribes of Krike, Crys and Dom search for allies and for the truth of what binds them to the Gods of Light. And in the royal palace itself, Tara – once a soldier, now a slave – hopes to ignite a rebellion.

But time is against them. A child will soon be born with the power to return the Dark Lady from death, and the long-prophesied final battle for the future of Rilpor and Mireces, of humans and gods, is near.

Bloodchild is how you finish a trilogy and break your readers’ hearts half a dozen times or more.

While Darksoul bore the burden of being the middle child – and bore it ridiculously well (Trickster, I love that book), Bloodchild had so much riding on it to bring this epic (yes it’s dark – possibly grimdark – but certainly epic) trilogy to an end, and it did it in style.

We’ve all had those books where there are loose ends left drifting in the wind, or where we felt a character didn’t have a deserving ending, that is not the case here. Bloodchild not only delivers a spectacular ending to a story that has pulled us all through blood and violence, hope and despair, death and re/birth but for the characters too. They’re not all happy – and I continue to shed tears over this book with each rereading, those moments are drawn so well, so vividly that I can’t help but feel them – but none of them is wasted, at odds with the character or unsatisfying.

Bloodchild stands out because the Light – the Heroes – have lost. They haven’t won the day, they’ve lost lives, the city, and even the country – and they keep fighting, even though that now means fighting by invading their own homeland. It’s not just about the final battle. It’s about every other fight alone the way, no matter how big or small, it’s about skirmishes and rebellion. It’s about hope – and that has always been an essential part in this trilogy – hope in the darkest moments, and that shines through even more strongly in this book and makes each loss, each step back all the more painful. Especially, as no one is safe in this world, regardless of what side of the conflict you’re on, whether you’re man, woman or child…or God.

I also don’t think you can talk about this book or even the trilogy without talking about love. Now, I am not someone who goes out of their way to read romance, and while I can enjoy it as part of a story, I generally prefer it in the background. However, the relationships in this series caught my heart and broke it in equal measure. As this the richness and variety. I’m not just talking about the diversity, although that is fantastic and certainly one of my favourite parts of the book. Love in all its forms is explored here, from the love of a people for their Gods, the love of a parent – old and new, to the love of couples in the worst of circumstance. We see how love corrupts, how love is the line that some people draw in the sand, we see what people will do for love.

Bloodchild also saw the worldbuilding expand, with the proper introduction of Krike. This was one of my favourite parts of the entire book because it was a fascinating country and I loved the exploration of their beliefs and how the Fox God played into that and I would happily read more about it.

In all honesty, there are no words for how much I love this trilogy – for me, it had everything that I look for in fantasy it was dark and gritty, the worldbuilding was great, and the characters wormed their way into my heart (and shattered it several times), and as I finish this, I am already itching to read them again. I will also say, that Bloodchild is also one of the few audiobooks I have listened to, and it is fantastic in that format too, the narrator is brilliant, and I will be investing in the other two books too once I am back to commuting to work. Although as I learned last week – not the best book to fall asleep listening to, as I ended up with some…interesting dreams.

All that remains for me to say is bring on November and the release of ‘The Stone Knife’ book one in Songs of the Drowned, Anna Stephens new trilogy.

Pre-order: ‘The Stone Knife’ (Songs of the Drowned #1) – Anna Stephens

If you’ve read it, or read it in the future, please feel free to shout at me about this fantastic book as I cannot talk about it enough and will happily cry about Darksoul any day. 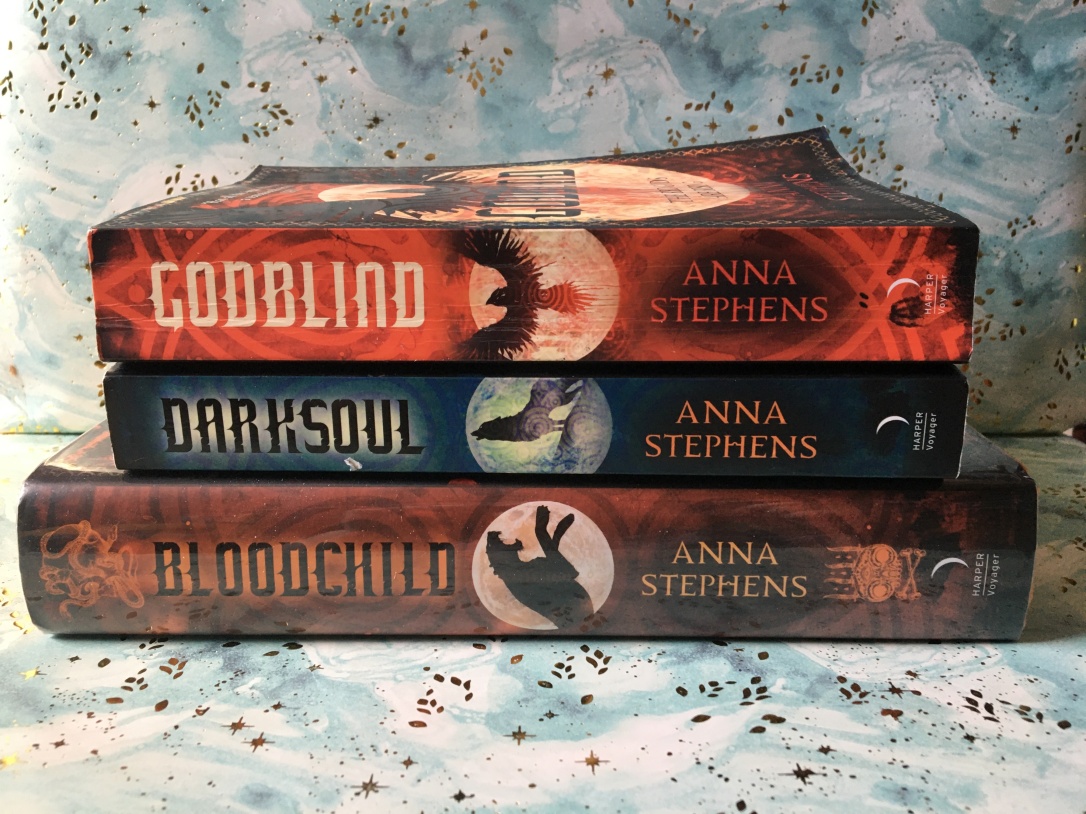