Hello!
Today, I am delighted to finally be able to review ‘The Bone Ships’ which shamefully has been sat on my shelf since last October when I picked it up at MCM London. I wish that I had read it sooner, but I’m thankful that I’ve read it now and fallen in love, and it has certainly bumped RJ Barker’s first trilogy further up the TBR pile (the first book of which has also been sat on the tower for far too long). 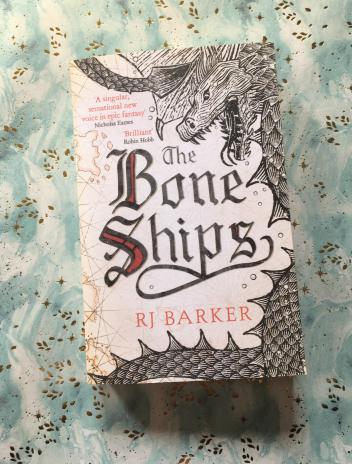 Two nations at war. A prize beyond compare.

For generations, the Hundred Isles have built their ships from the bones of ancient dragons to fight an endless war.

The dragons disappeared, but the battles for supremacy persisted.

Now the first dragon in centuries has been spotted in far-off waters, and both sides see a chance to shift the balance of power in their favour. Because whoever catches it will win not only glory, but the war.

It took me a little while to find my sea legs with this story, but once I had it caught my imagination, and I fell in love with ‘The Bone Ships’, and I couldn’t stop reading it. From the beginning though, I loved the premise of building ships from the bones of ancient dragons – I love dragons, and after lots of research for a seafaring story of my own, I have a fondness for ships and seafaring – so that was immediately a win for me. The Bone Ships though proved to be so much more.

I couldn’t start this review with anything other than the world-building. This is a strange, harsh world, and as a reader, you are thrown into the depths from the beginning, there is no concession to the strangeness, to the fact that this is a world with its own origins, religion, flora and fauna and with a vocabulary to match. It was a bold move and took a little while to adapt to because certain things only became clear through context and reading onwards, but it worked beautifully in this book. There is a lot to take in, and you can’t look away for a moment for fear of missing some crucial part, and it pulls you completely into the world, and the lives that the characters are leading, and the best thing is that there is clearly more to come in the rest in the trilogy.

It was refreshing to have narrative not from the view of the ‘hero’, but from the view of the character they had deposed. Joron was a fascinating character, although it took me a little while to warm to him in the beginning when he was adrift, hiding from his responsibilities of Shipwife and drinking away what command he might have had, but he grew throughout the story and found a role for himself. Maes Gibryn or Lucky Maes is the true protagonist, the one that took his place as Shipwife and then dragged him along. She is a fantastic character, determined and focused, a force of nature which could bow the world and the people around her to her will, or force her way through if they resisted.

It would have been interesting to see her pov but using Joron’s worked so well and made for something new and interesting, without tearing focus away from Maes, and it is clear that there is more to him than there appeared at the start and it will be interesting to see if he becomes the ‘hero’ over the course of the trilogy. While there is a focus on these two, and their story, the secondary cast are drawn believably, and we get to learn more of this crew of doomed souls (Black Ships are for those given a death sentence), and they are done so well that you cannot help but route for them, especially in the latter part of the book when the action and the hunt really get underway.

The action scenes in The Bone Ships were fantastically written, each was vividly believable, and the tension bled through the pages, and I particularly enjoyed the naval warfare scenes which can be difficult to get right but were spot on here.

After a slowish start and the daunting plunge into a strange world, this was a fantastic, exhilarating read and I finished it wanting more, and I cannot wait to read the next installment in this series.

One thought on “Book Review: The Bone Ships (The Tide Child #1) – RJ Barker”