It’s been a crazy couple of weeks as I am finally back at work after three months of furlough, which is great because I have missed being there, but also exhausting and reading and reviews unfortunately were the parts of my life that fell slightly to the wayside. That said, I have finished several – so I have a few reviews in the pipeline now I getting into the swing of things, and I am determined to get out a couple of posts for the #womeninsff on twitter before the end of July.

That said today – somewhat later than planned – I am reviewing ‘Ashes of the Sun’ by Django Wexler. It was the cover that immediately grabbed me with this book, I just love that combination of colours and the entire composition is just eye catching, and I really liked the premise.

Best of all, I really enjoyed this book. 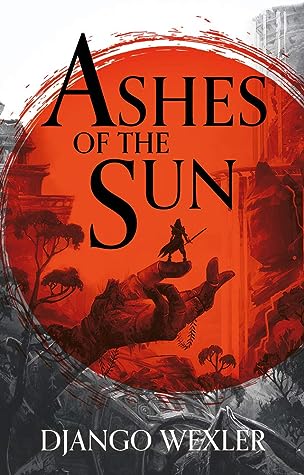 Long ago, a magical war destroyed an empire, and a new one was built in its ashes. But still the old grudges simmer, and two siblings will fight on opposite sides to save their world in the start of Django Wexler’s new epic fantasy trilogy.

Gyre hasn’t seen his beloved sister since their parents sold her to the mysterious Twilight Order. Now, twelve years after her disappearance, Gyre’s sole focus is revenge, and he’s willing to risk anything and anyone to claim enough power to destroy the Order.

Chasing rumors of a fabled city protecting a powerful artifact, Gyre comes face-to-face with his lost sister. But she isn’t who she once was. Trained to be a warrior, Maya wields magic for the Twilight Order’s cause. Standing on opposite sides of a looming civil war, the two siblings will learn that not even the ties of blood will keep them from splitting the world in two.

Ashes of the Sun is one of those books that hooked me at the very start. The introduction to the book, and to our two POV characters packed quite a punch. I will say that the time transition that followed threw me briefly, but the story quickly drew me back in.

The alternating POV format following Maya and Gyre, a brother and sister that were separated at a young age, was skillfully done, and each provided a different viewpoint both on what had happened when they were children, the world around them and the conflict that they found themselves on opposite sides of. Of the two, Maya was my favourite, there was just something about her personality that I liked that little bit more. However, Gyre was still a fascinating character, and his motivations were if anything even more understandable than his sister’s at times. What I really liked was how, as their paths come closer and closer, the opposing approaches to what is happening create an even more vivid picture of what is happening. Showing that there are misconceptions, and a disconnect between certain factions, that are only feeding into the conflict. It made for a very engaging read and left you rooting for characters on both sides.

The supporting cast is wonderful too, each bringing something different and unique to the story and to our main characters. My favourites were Beq, who Maya has a crush on – and I am always happy to see more f/f rep in books, and Kit who was an instant favourite from the moment she was first introduced. The main cast is rather small, but that means there is more of a chance to get to know them, and I look forward to seeing where the characters go in future books.

However, as well done as the characters were, it was the world-building that truly made me fall in love with this book. It’s the one thing I really look for in fantasy, and Ashes from the Sun had such a wonderfully rich world that it pulled me in completely. It’s a world that we’re thrown into from the start and learn about through the story, the world-building is carefully interwoven with the plot, so that there are no real info dumps. What it does is create a world that feels very real and lived in, while still leaving areas to be explored and questions unanswered, especially about things such as the plaguespawn and the Chosen. It would have been nice to learn a little more about them in this book, but certainly didn’t detract from the story, and I am confident that there will be answers to come in the future, and I am more than happy to return to this world to find them as I have spent some happy hours there while reading this book.

This rich world-building, creating a vibrant, interesting dystopian world, was paired with a fantastic writing style. It was fast-paced, and there was a lot packed into this book, particularly towards the end. I really enjoyed the prose and the humour, but what really stood out for me was the fight scenes – which can be so hard to get right, but these ones were that right balance of information and action, which combined with the various fighting styles made for dynamic, engaging fight scenes.

This was my first venture into Django Wexler’s work, but I will certainly be continuing with this series, and once my TBR is at a slightly more manageable level (or more likely when I give in to temptation), I will be checking out his earlier works. It was a wonderfully immersive read, particularly with the world-building and was a much needed and very enjoyable escape from the recent chaos. I would definitely recommend this book to anyone wanting a fast-paced adventure with engaging characters and fantastic world-building.