As part of my ongoing goal to try and read more science-fiction, I was delighted to be approved for the e-arc of ‘The Vanished Birds’ by Simon Jimenez which was released last week. I had fallen in love with the cover, and the premise sounded interesting (although as you will see below, the blurb doesn’t come close to capturing this book), and then when I read it I was blown away by the prose. I hope that you will check out both the book and the author! 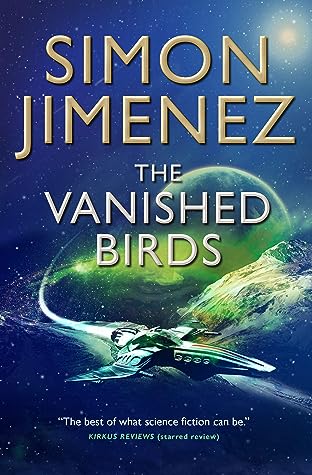 Nia Imani is a woman out of place and outside of time. Decades of travel through the stars are condensed into mere months for her, though the years continue to march steadily onward for everyone she has ever known. The captain of a transport ship contracted to the Umbrai corporation, she lives only for the next paycheck, until the day she meets a mysterious boy, fallen from the sky.

A boy, broken by his past, and hunted by his present. For he is one of the few born with the gift of the Jaunt. The ability to travel instantly anywhere in the universe. An ability that threatens the vicelike control of the settled worlds by corporations such as Umbrai.

Fumiko Nakajima, the great scientist responsible for the design of bird-like Stations that Umbrai uses to control vast tracts of space, has been searching for one such as he for a thousand years.

Together, they set out to protect the boy, a journey that will cross the decades and light years all the way out to the fringes of settled space where the laws of civilisation do not apply, and they will have only each other to rely on.

This was a challenging review to write because this is a book that is difficult to put into words. I’m not entirely sure what I was expecting when I went into The Vanished Birds, but I feel that the blurb doesn’t really come close to encapsulating this unique book.

The Vanished Birds immediately gains an extra star just for how beautiful the prose is, regardless of the rest of the book, it is the kind of writing that sweeps you away before you realise it. The descriptions were out of this world (pun intended), and the emotional depth of the narrative, meant that this was a story that for any of its faults wrapped itself around your heart, and I would read it again and again just to lose myself in the writing.

That said, I did find it a difficult book to get into. The first chapter was strange, because it felt as though it could have been almost a standalone short story, and ended up feeling like an overly long prologue in places (and I am usually a fan of prologues), and this then moved into a slow-moving first third or so of the book. This is not a book for someone who wants to be swept away by fast-paced action (at least at the beginning). However, that in itself is not a complaint, because one of the strengths of this book, is the way that it meanders, bringing in characters and narrative threads in one of the most far-reaching space operas I’ve read so far. The Vanished Birds is very much driven by character rather than plot, and it does an excellent job of exploring the relationships between them, and how their choices affect them, the people around them and the world they live in.

Another strength of this book is the setting. Although there were a few places here and there that felt a little more contrived than others, but in a space opera of this size, those are lost amongst the worlds and locations that did stand out. It’s hard not to fall in love with farming worlds with purple skies, space-age, high tech cities and planets that have been abandoned and overrun with dogs. Although a large part of the book is spent on the ship, these worlds were fascinating and a joy to read about, and it left me always wanting to see where the crew would go next.

Where the book lost me a little was towards the later part when the plot took a somewhat surprising and dramatic shift. In some ways, I can understand the timing and pacing, because the book and prose had established itself, and this shift brought some much-needed conflict into the narrative and a feeling of tension and worry for the characters that gave the book extra flavour. However it was such a departure from the previous meandering tone that I had become comfortable with, that I was jolted out by the sharp rise of tension permeating nearly every scene, and it took a little while for me to get back into the flow, although overall I felt that it did add to the narrative. I also thought that the ending fell a little short of what I wanted, not exactly unsatisfying, but as though it could have done with taking a little longer or perhaps having an epilogue just to wrap up the final threads.

Overall though, I did love this book, from the beautiful, lyrical prose which in my opinion is this book’s largest selling point and that I couldn’t get enough, to the sweeping scale of this space opera. I would recommend this book, and I will certainly be on the lookout for more works by Simon Jimenez in the future

One thought on “Book Review: The Vanished Birds – Simon Jimenez”