Today I am reviewing what is probably my favourite Sci-Fi read for this year – The Vela. This is one that I stumbled across on netgalley and was intrigued enough to request, and I am so glad that I was approved, because I loved this book and I find myself already wanting to read it again. 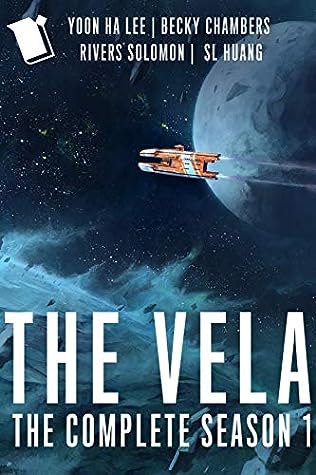 In the fading light of a dying star, a soldier for hire searches for a missing refugee ship and uncovers a universe-shattering secret.

Orphan, refugee, and soldier-for-hire Asala Sikou doesn’t think too much about the end of civilization. Her system’s star is dying, and the only person she can afford to look out for is herself.

When a ship called The Vela vanishes during what was supposed to be a flashy rescue mission, a reluctant Asala is hired to team up with Niko, the child of a wealthy inner planet’s president, to find it and the outer system refugees on board.

But this is no ordinary rescue mission; The Vela holds a secret that places the fate of the universe in the balance, and forces Asala to decide—in a dying world where good and evil are far from black and white, who deserves to survive?

When I requested this one, I was intrigued by the premise, and curious as to how this serialised series with multiple authors would work – brilliantly as it turns around. The Vela hooked me right from the beginning, and while I could pick up on the shifts in writing style, they were subtle.  I found the chapters for the most part seamlessly weaved together a complex, wide-reaching space opera, in a way that I was always rushing to pick up the book as soon as I had a moment spare to continue reading.

Firstly, I loved the complexity of the worldbuilding. The Vela is about a dying solar system, with the complexities of relationships and experiences of planets at different ends of the crisis. You have the ones in the inner ring, who are most distant from the threatening climate change and planetary death that has come about from the people harvesting hydrogen from the Sun to point where it is now dying. At the other end, you have the peoples from planets that have already died, or which are dying and becoming uninhabitable, triggering a system-wide refugee crisis that has been ongoing for decades. This people-induced climate change, and the detailed, heart-breaking tale of refugees risking everything to escape. Forced to make lives in a camp because the richer planets won’t allow them to land on their surface, shutting their borders apart from when they need good publicity or there is a tactical reason, all resonate very strongly with the current situation our world is in today. Grounding the narrative firmly and painfully in reality without losing that wonderful, otherworldly feel of being in space.

There was a rich sense of culture, and not just from the inner-ring planets that still existed and were clinging to normality, with the overhanging threat of climate change, but amongst those fleeing the dying planets. Stories passed on, songs shared, tattoos as well as physical items smuggled/salvaged while fleeing, woven together with the memories of one our main characters Asala, allow us to build a sense of the worlds and lives that have been lost, even without seeing them in their full glory, and that creates a real sense of loss.

The two main characters Asala – a sniper from one of those dying planets, whose family had sent her to safety years before – and Niko, the child of an inner-ring President made for an odd pairing that worked brilliantly. They’re tasked with finding the titular ship when it goes missing following a rescue mission, something of a publicity stunt in Niko’s father’s push for re-election. These two characters drive the narrative of The Vela, and they are fascinating, complex and flawed, bringing together the experiences of both sides of the divide in the solar system, even though their motives and paths are incredibly different.

From this starting point though, The Vela becomes something of a thriller, because there are twists and turns from start to finish, conspiracies and complications both from the pair themselves, but from the real motives behind the rescue mission, to the relationships between the inner-ring planets themselves, as well as their relationships with the refugees trying desperately to reach them. I had so many suspicions, and most of them were proven wrong, and I loved that because this book kept me on my toes from start to finish. Even better, it did and had wonderful action scenes, without losing the heart of the story at any point – the fight for survival, tragedy and hope, injustice and a search for justice, family and friendships.

The Vela touches on so many things that it is impossible to encompass in a single review. It has wonderful LFBTQIA+ representation, with a non-binary main character and sapphic relationships, as well as dealing with characters including Asala with disabilities, without resorting to advanced tech to erase that – and most importantly, those aspects are part of them, but they’re not explained or excused, it is as natural to the characters and story as it would be in real life. All of this, along with a wonderful secondary cast, was woven into a world undergoing changes and challenges, with political and social manoeuvring, and threats that are very relevant today to create a living, breathing narrative that consumes you.

I adored this book from start to finish. It wasn’t perfect, and I will admit that. There were a few shifts between chapters, particularly towards the start that I found a little jarring until I got into the rhythm. There were also a few places where I questioned Niko’s hacking abilities, as they felt a little overpowered in places, although they were largely balanced out by their other abilities. Still, this was a fantastic, consuming read that I would highly recommend, and I live in the hope that there will be a second season.